101 Things You May or May Not Know About Arnold Palmer 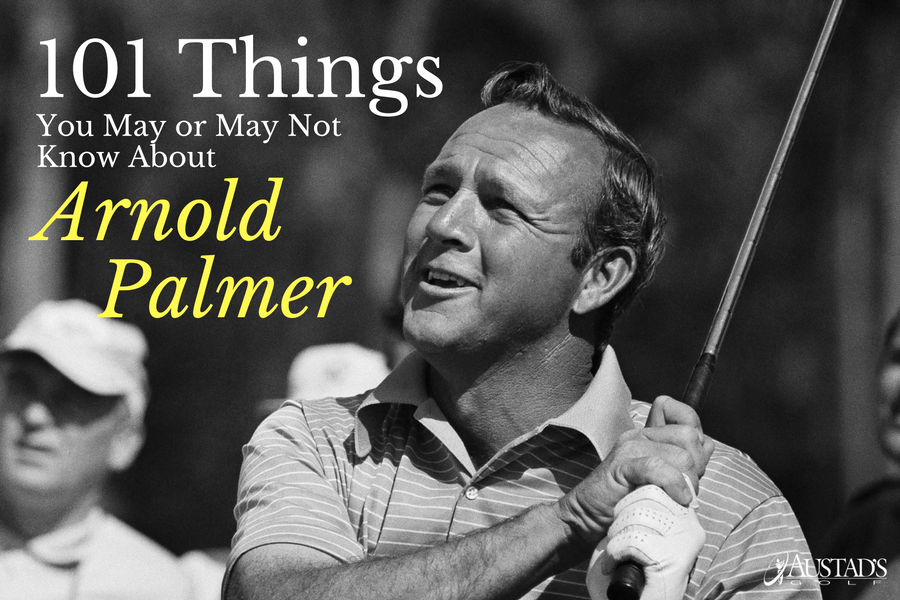 Golfing great Arnold Palmer was a titan in the sport of golf and was loved around the world by fans and members of Arnie's Army.  Not only was Palmer instrumental in popularizing and bringing golf to a mainstream audience, he was truly one of the biggest crossover stars from any sport.  Incredibly charismatic, people felt like they really knew Arnie, whether they were just watching him on TV or getting a free autograph from him in person.  His love for the game of golf and for life has always been respected and admired and Palmer left a legacy through his many charities and larger than life personality that will be remembered and missed for years to come.

Here are 101 things you may or may not know about the man, the myth, the legend - Arnold Palmer:

2. He was the first of four children born to Milfred “Deacon” and Doris Palmer in Latrobe, Pennsylvania.

3. At the age of three, his father, who was the head pro and golf course superintendent at Latrobe Country Club, gave him a cutdown set of golf clubs and introduced Arnie to the game.

4. Because his father was “just a golf pro”, Arnie wasn’t allowed to swim in the club pool.

5. He swam in the creek that supplied the pool water and joked that he urinated in it.

6. In 1971, Arnie bought the Latrobe Golf Club.  He’s been welcome to use the swimming pool ever since.

8. He went to the same high school as Fred Rogers from Mister Rogers Neighborhood.

10. By the time he was 17, he'd already captured two state interscholastic championships.

12. Palmer quit Wake Forest and joined the US Coast Guard after his roommate, Bud Worsham, was killed in a car accident in 1951.

14. By 1954, Palmer had returned to golf and quickly resumed his old form. That year, he won the second of two consecutive Ohio Amateur Championships as well as the U.S. Amateur title.

16. But it was the 1958 Masters Tournament in Augusta, Georgia, that launched the young golfer to fame. Palmer took home the title—making him the tournament's youngest champion at the time—and ended up finishing the year No. 1 on the money list, with $40,000.

18. In his Ryder Cup debut in 1961, Arnie earned two points on first day, teaming with Billy Casper in morning and afternoon foursomes

20. Palmer is also credited by many for securing the status of The Open Championship (British Open) among U.S. players. Before Ben Hogan won that championship in 1953, few American professionals had traveled to play in The Open, due to its travel requirements, relatively small prize purses, and the style of its links courses

21. Palmer traveled to Scotland in 1960, having already won both the Masters and U.S. Open, to try to emulate Hogan's feat of 1953, of winning all three in a single year. He failed, losing out to Kel Nagle by a single shot

22. After his loss in 1963, he came back and won The Open Championship in 1961 and 1962, solidifying for American golfers the importance of winning in Britain.

23. It took him 13 years to become the first golfer to win $1 million in career earnings.

31. Nicknamed "the King," Palmer won 93 tournaments during his career (62 were PGA Tour victories).

33. Arnold Palmer is credited with bringing golf into the mainstream and making it popular with people outside of country clubs.

34. Palmer's fans were known as Arnie's Army and followed him on the weekly PGA Tour events.

36. He also has a Presidential Medal of Freedom.

37. He’s the only sports figure to have both.

38. In 2013, he also received Congressional Gold Medal, the sixth sportsman so honored

39. JFK sent him film of his golf swing to critique.

40. You can order an Arnold Palmer and restaurants worldwide will pour you a half-iced tea, half-lemonade.

42. He met his first wife, Winnie, on a Tuesday and asked her to marry him four days later.

43. Arnie’s would-be father-in-law boycotted the wedding because he doubted Palmer could make enough to support a family.

45. They had two daughters together – Amy and Peggy.

46. He helped found a nature preserve named after Winnie in Latrobe, Pennsylvania.

47. In 1989, the couple helped found the Winnie Palmer Hospital for Women & Babies in Orlando, Florida.

48. At the time, it was the only hospital in the Southeast (and one of only six in the nation) dedicated to serving the unique needs of women and children.

51. The Arnold Palmer Medical Center is the largest facility in the U.S. dedicated to children and women.

53. His grandkids called him ‘Dumpy.’

55. He helped found the Golf Channel.

56. As co-founder of Golf Channel, Palmer ceremoniously flipped the switch as the cable network makes its on-air debut.

57. He was honorary national chairman of the March of Dimes Birth Defects Foundation for 20 years.

58. Richard Nixon asked his advice on how to end the Vietnam War.

60. Kirk Douglas was asked of all his famous acquaintances, who had the most personal magnetism’ His answer: Arnie.

62. He worked as a paint salesman briefly after getting out of the Coast Guard.

65. While many have tried to convince him, Arnie has never wanted to create a Chardonney/Cabernet wine blend.  A so-called “Arnold Palmer” for the wine industry.

66. Arnie became a pilot to help overcome his fear of flying.

68. His around-the-world record flight would have finished sooner, but he stopped to refuel in Sri Lanka and rode an elephant.

69. He flew a Boeing 747 before they were in commercial service.

70. The Arnold Palmer Center for Golf History is home to the world’s leading collection of golf artifacts.

71. He expects men to take off their hats when they go indoors.

72. Gerald Ford’s first act after leaving the presidency was playing a round of golf with Palmer.

73. He often cries during the national anthem.

74. After a lifetime of signing autographs for free, he finally charged for his signature during the 1994 Bay Hill tournament when his grandchildren told him business was slow at their lemonade stand. Palmer agreed to sign for anyone who’d buy a $1.50 glass. The kids made a quick $50 before running out of lemonade.

75. For years, the trophy at his Arnold Palmer Invitational tournament in Orlando was a sword.

76. Arnold Palmer designed more than 300 golf courses around the world.

77. He designed the first golf course built in China.

78. Arnie was part of the inaugural class for the World Golf Hall of Fame in 1974.

79. There is a 9-foot tall statue of Palmer at the Arnold Palmer Golf Complex on the Wake Forest campus in Winston-Salem, N.C.

80. The golfing great Arnold Palmrock appeared in the animated ‘The Pebbles and Bamm-Bamm Show’ in 1971.

81. Arnold Palmer once filled in for Johnny Carson on The Tonight Show in 1970.  His performance wasn’t great, but the audience, as one might expect, loved him.

82. Arnie’s best friend is Howdy Giles, who wrote a book about their friendship called The King and I.  Giles is also his dentist.

83. Nike’s ‘LeBronold Palmer’ sneakers are named for him and LeBron James.

84. He led the campaign to prevent golf courses from being built in Florida’s state parks.

88. His review of Bill Clinton’s golf game: ‘He can hit a long way, he just doesn’t have a ZIP code.’

90. Arnold Palmer and Jack Nicklaus eventually became good friends, but their relationship started off very competitive and a bit rocky.

91. After the 1975 US Open at Medinah, where Jack and Arnie were paired together on the last day, Jack was bemoaning his three closing bogeys to finish the round.  Arnold finally jumped in and said, "Why don't you just sashay your ass back out there and play them over?"

93. He loves to watch westerns on TV.

94. Arnold really likes oysters and has been known to pack away as many as 4 dozen in one sitting.

95. He considers a drive more than 5 miles a major journey.

98. Arnie built a financial empire in advertising, architecture, clothes, cars, motor oil, catsup, dry cleaners, umbrellas, drinks and pretty much anything else you can think of.

99. Palmer is ranked third on Forbes' 2016 list of The Highest-Paid Retired Athletes, with estimated earnings of $40 million in 2015.

101. Palmer passed away on September 25, 2016.  The King’s legacy of golf, charity and love will live on for many decades to come.