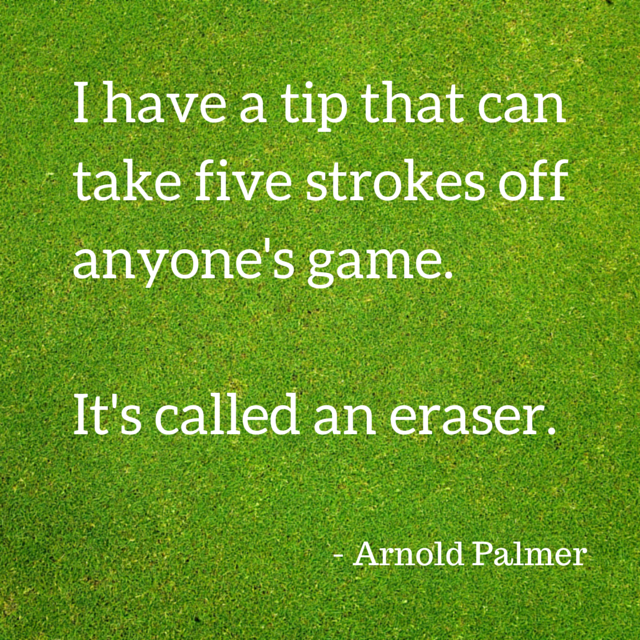 Arnold Palmer was a man of seemingly endless wisdom.  We've compiled his top ten quotes here.  Soak it in and learn from the wisdom of one of the greeatest golfers and humans to ever grace this earth.

With the Arnold Palmer Invitational kicking off today, we're obviously hoping for a great tournament filled with lots of amazing shots and a heavy dose of drama.  To celebrate the 49th anniversary of this great tourney (yes, it's really been around since 1966!), we thought we'd take a little time to celebrate the man behind the tournament, Arnold Palmer.

Let's face it, if you're a fan of golf, you're probably an Arnold Palmer fan.  Arnie's Army has been going strong now for decades and I'm sure his Army will continue to sing his praises for decades more.  Palmer is one of those rare individuals who supercedes his profession and he has been and continues to be one of golf's greatest assets.  To celebrate this one-of-a-kind man, we've put together 10 of our favorite Arnie quotes.  Enjoy!

Golf is deceptively simple and endlessly complicated; it satisfies the soul and frustrates the intellect.  It is at the same time rewarding and maddening - and it is without a doubt the greatest game mankind has ever invented.

Putting is like wisdom - partly a natural gift and partly the accumulation of experience.

One thing I've learned over time is, if you hit a golf ball into water, it won't float.

The most rewarding things you do in life are often the ones that look like they cannot be done.

You must play boldly to win.

What other people find in poetry, I find in the flight of a good drive.

I would like to have won more golf tournaments but I wouldn't sacrifice my life.  I've enjoyed it.  I'd love to do it again the same way.

I have a tip that can take five strokes off anyone's game.  It's called an eraser.

Winning isn't everything, but wanting it is.

So what do you think?  Did we miss any?  What are your favorite Arnold Palmer quotes?