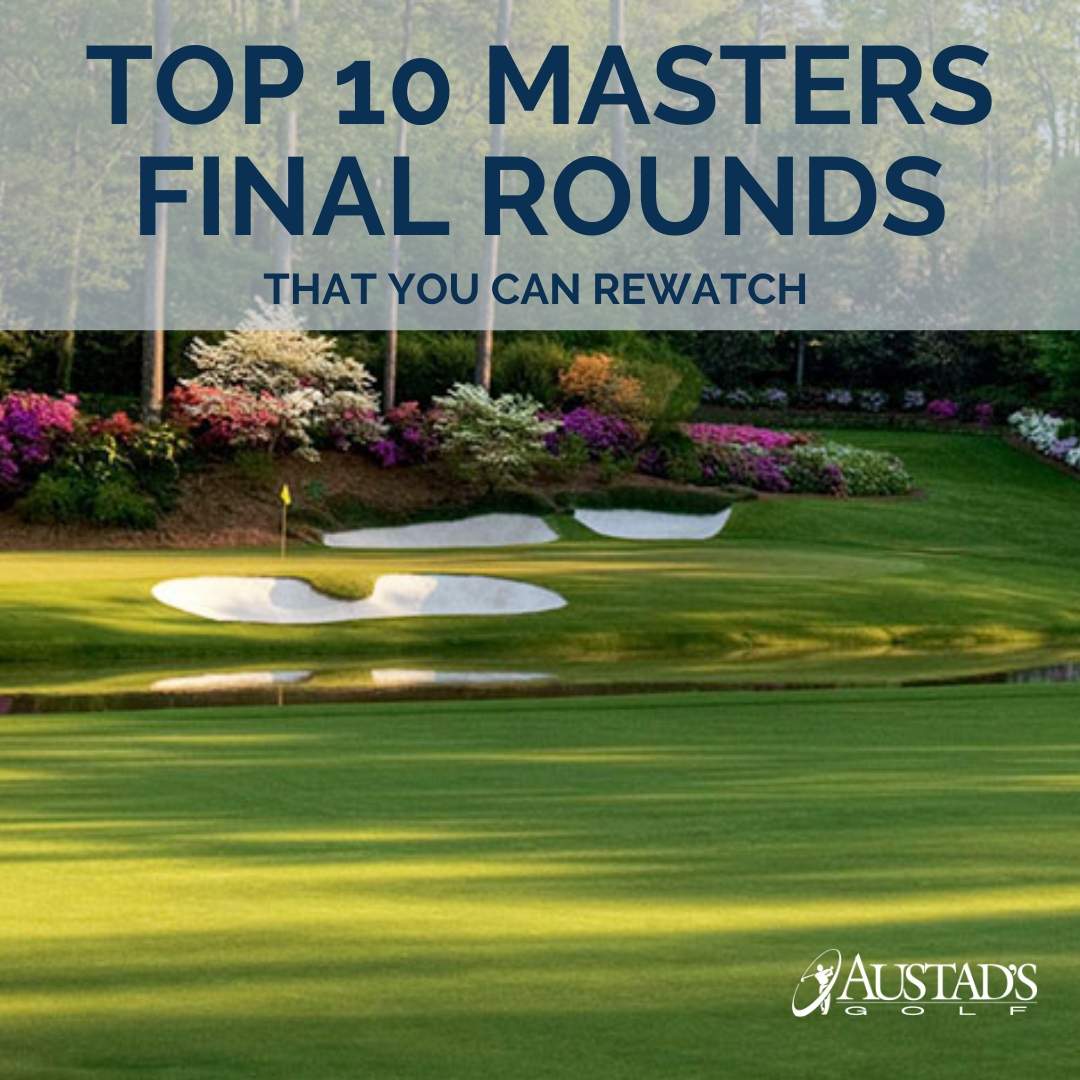 2020 is shaping up to be a very strange year! As of right now, the Masters is going to be in November, we're all watching weird robot fights on ESPN to get our sports fix and we're all going absolutely stir crazy due to social distancing. We're here to help you get your golf fix and have put together a list of the Top 10 Masters Final Rounds. You can even watch them online because technology!!  Enjoy and let us know in the comments what you think!

A.K.A. The one where it looks like a playoff is imminent on 18 but then Sandy Lyle hits a terrible tee shot and rebounds with a miraculous approach from a fairway bunker.  It’s got drama, late 80’s fashion, a young Freddie Couples and a fan-freaking-tastic finish.

Fun facts: Sandy Lyle was the first Brit to win the Masters.  This was also the first win with a birdie on 18 since Arnold Palmer did it in 1960.

Are you a fan of Shakespearean tragedies?  If so, then you’ll LOVE the final round of the 1996 Masters!  This is the one where it looked like Greg Norman was going to finally add a green jacket to his collection but suffered one of the worst back 9 collapses in Masters history allowing Nick Faldo to capture the win.  So incredibly tragic.

This final round is just so much fun.  It’s one of those great epic back and forth battles and the 2017 Masters played out between Justin Rose and Sergio Garcia in the final group.  Garcia went up first but then Rosie took the lead a few holes later and then TWIST!  Garcia hits it into the trees but escapes with a par.  This one eventually goes to a playoff and man, what a ride!

Fun fact: This was the first Masters after the passing of Arnold Palmer and the Green Jacket was awarded on what would have been the 60th birthday of Garcia’s hero, Seve Ballesteros.  I’m not crying – YOU’RE CRYING!!

The final round of the 2012 Masters played out kind of like a great sports movie. The playoff between Bubba Watson and Louis Ooosthuizen at the 10th hole has that incredible storyline where our hero, Bubba Watson, is facing an impossible situation.  He’s buried deep in the woods and from every angle, it looks like there is absolutely no way out.  Then he takes a gap wedge and aims nowhere near the hole that he can’t even see.  It’s a completely blind shot that is bent farther than Beckham could even dream of and it lands 10 feet away from the hole.  Crowd goes wild.

Are you ready for a comeback story? The scene: once-great Jack Nicklaus is on the back half of his career at 46 and it’s pretty much a given that he’ll never win another major. In 1986, it had actually been 5 years since Nicklaus experienced a major victory and no one really thought he had it in him.

This is a classic for so many reasons – eagles from surging Seve Ballesteros and Tom Kite, great 80’s style and Nicklaus going eagle-birdie-birdie on holes 15, 16 and 17.  Amazing.

When you think of gutsy golf shots, Phil Mickelson is probably the first golfer that comes to mind. His legacy was in large part defined by his performance at the 2010 Masters. Hole 13, Phil is right in the mix but he’s got what looks like a completely unplayable lie, sitting around the bend and a whopping 207 yards from the green.

So what does he do? Hits it perfectly between two trees, over Rae’s Creek and onto the green, setting himself up perfectly for an eagle. Spoiler alert: he misses the eagle putt but emerges victorious anyway.

Going into day four at the 2011 Masters, it looked like Rory had things pretty well sewn up. Unfortunately the Irishman couldn’t hold things together and a whole bunch of great golfers stepped up to make a charge including red hot Australians, Adam Scott and Jason Day. Ultimately there would be EIGHT different players with at least a share of the lead in the final round, but it was cool, quiet South African, Charl Schwartzel who emerged victorious.

I’d compare the final round of the 2011 Masters to an Agatha Christie novel. Everyone is a suspect and the person you least expect actually does the deed. Highly entertaining.

Holy moly was the 2004 Masters a roller coaster ride of emotion! This final round was like one of those Fast and Furious movies – so many stars doing so many incredible stunts that you hardly know where to look. You’ve got back to back aces from Padraig Harrington and Kirk Triplett, KJ Choi holing out for the third eagle ever in Masters history on number 11, Phil and Chris DiMarco going back and forth and of course, lefty’s first green jacket with the classic Phil jump. Definitely worth a watch!

Tiger’s chip in on 16 is quite possibly the most memorable shot of the 21st century. Replayed over and over and giving Nike and incredible brand moment, the Tiger fist pump and the resulting Tiger roar are likely embedded in the memories of every golf fan with very good reason.

What you may have forgotten is that Tiger actually bogeyed the next two holes, which led to a playoff with Chris DiMarco. Fortunately for Tiger, he took care of business in the playoff, but the highlight will always be #16.

In the Austad family, the 1987 Masters is discussed every April because as Austad’s CEO likes to mention, “I was standing RIGHT THERE!”. Dave was 27 years old and it was his very first time attending the masters.  Hometown kid and hometown favorite, Larry Mize, who used to sneak under the fence at Augusta to play the course, ended up in a playoff with 2-time masters champion, Seve Ballesteros and World #1, Greg Norman.

Ballesteros three-putted on the first playoff hole turning #11 into a classic David vs Goliath story. After the first shots, Norman definitely had the upper hand with his ball on the fringe, while Mize was off the green about 100 feet from the cup. Mize hit first and did the unthinkable. He lofted a sand wedge that bounced twice and rolled straight into the cup. Crowd goes wild, Mize throws his club in the air. The greatest finish ever at the Masters.

What do you think? Did we nail our list? What did we miss? Let us know in the comments!